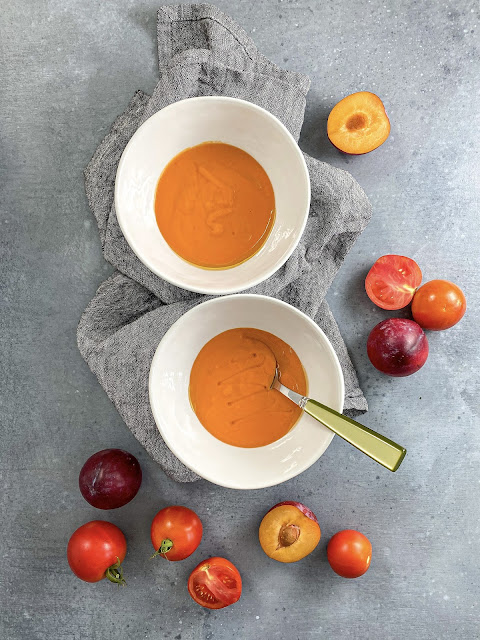 Our intense, way too long heatwave seems to be winding down, finally.  Here is a recipe for cold soup for dinner for our way too hot-Bay Area's September heatwave of 2022, or one in the future.  I always thought September and October were too hot, but now...the word dread comes to mind.  So, I made this cooling gazpacho one night during the worst of the heatwave, like 112F during the day and over a 100F at dinnertime.  It wouldn't surprise me if we still have another heatwave before the rainy season which used to start in midway into October, now I'm dating myself, and we had snow in the Sierra in November.

I am loving the addition of plums to my soup, instead of the usual cucumbers that are chunked up and blended with the tomatoes.  The plums came from the farmers market and were innocently sitting in a bowl, minding their own business, next to the tomatoes on my counter, when the idea to add them to the tomatoes in the soup came to me.  Plums add a sweet note to the soup which also mellows along with all the gazpacho flavors after about a six hour stay in the refrigerator.  A drizzle of lime infused extra virgin olive oil adds a nice touch before serving.

Ingredients and Recipe for Tomato Plum Gazpacho
Serves 6
2 pounds ripe red tomatoes, cored and cut into chunks
1/2 yellow bell pepper, cored and cut into chunks
3-4 ripe plums, pitted and sliced, about 2 cups
1 small red onion, peeled and cut into chunks
1 clove garlic, peeled and sliced I used elephant garlic which bigger and milder
2-4 teaspoons aged sherry vinegar, to taste
Sea salt to taste
1/2 cup extra virgin olive oil, plus more for serving-I used lime infused for serving
Combine the tomatoes, pepper, plums, onion and garlic, add to a blender in 2 batches.  Blend at high speed until smooth, with the motor running add 1-2 teaspoons vinegar, about 1 teaspoon of salt and 1/4 cup olive oil to each batch.  The mixture will be a bright orange color and look emulsified.  Strain each batch or combine the two and strain all at once using a large fine strainer, push and stir the liquid with a rubber spatula over a large bowl.  Transfer the creamy soup mixture to a glass pitcher or container and chill until very cold, at least 6 hours or overnight.  Before serving taste and adjust the seasonings with salt and /or vinegar.  Serve in glasses or bowls- adding a drizzle of extra virgin olive oil or lime infused olive oil before serving.

February 03, 2021
Everyone loves an easy overnight no knead bread recipe, but in order to achieve the perfect overnight no- knead pane integrale or whole grain loaf for your taste, you must tinker with the ratio of bread flour and whole grain flour.  You must tinker with the flours by using a scale and keeping track of your flour ratios for the success of your future loaves.  Introducing whole grains to a loaf can be tricky, add too much and the resulting loaf may be too dense and gritty.  I love the flavor of whole grains in my bread but I prefer only a third of the flour to be whole grain while the rest of the loaf is straight bread flour.  I like the super 10 grain blend from KAF at about a 30 percent ratio to the bread flour in my pane integrale.  I discovered this while experimenting with whole grain flours to add flavor to my loaf.  The Super 10 grain blend has, spelt, millet, rye flakes, barley flakes, quinoa flakes, chia seed, amaranth, teff, buckwheat and sorghum.  I counted 10 grains, includ
Post a Comment
Read more