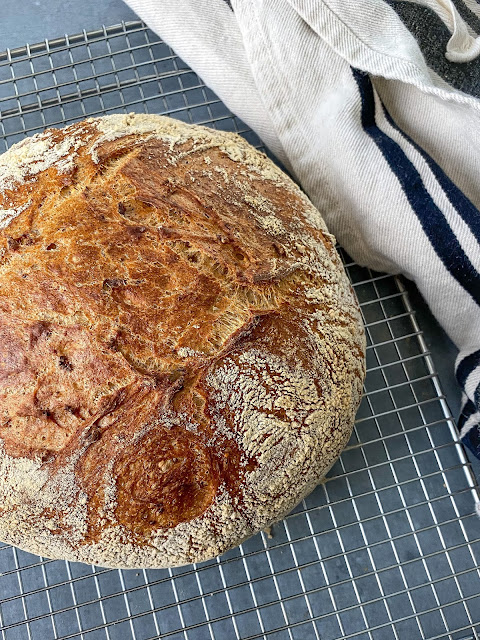 Everyone loves an easy overnight no knead bread recipe, but in order to achieve the perfect overnight no- knead pane integrale or whole grain loaf for your taste, you must tinker with the ratio of bread flour and whole grain flour.  You must tinker with the flours by using a scale and keeping track of your flour ratios for the success of your future loaves.  Introducing whole grains to a loaf can be tricky, add too much and the resulting loaf may be too dense and gritty.  I love the flavor of whole grains in my bread but I prefer only a third of the flour to be whole grain while the rest of the loaf is straight bread flour.  I like the super 10 grain blend from KAF at about a 30 percent ratio to the bread flour in my pane integrale.  I discovered this while experimenting with whole grain flours to add flavor to my loaf.  The Super 10 grain blend has, spelt, millet, rye flakes, barley flakes, quinoa flakes, chia seed, amaranth, teff, buckwheat and sorghum.  I counted 10 grains, including all those pesky flakes.  ps. I use a scale to measure my flours into one medium bowl to start this bread recipe.
Ingredients and Recipe for no-knead overnight pane integrale
makes one round loaf
300 grams bread flour
130 grams super 10 grain blend, KAF
2 teaspoons kosher salt
1/4 teaspoon instant yeast
390 milliliters cool water
Additional flour for dusting
Place a medium bowl on the scale and zero it out, bye-bye numbers.  First weigh out 300 grams of the bread flour, then add the super grain blend until the scale says 430 grams, stir in the salt and the yeast.
Add the water and stir until blended, the dough will be a sticky blob, don't worry about it.
Cover the bowl tightly with plastic wrap.  Leave the dough alone at room temperature, about 70 degrees, on the counter for about 18 hours.
So, I make the dough blob in the afternoon and the following day, 18 hours later, say 7am, I sprinkle an area on my counter with flour. I gently scrape the dough out of the bowl and on to the floured surface where I lightly with floured hands pick up an edge of the dough, lift and fold back towards the center of the dough blob, repeating that move on all four sides.  I gently nudge the dough into a nice round shape.  Note that I no longer have a dough blob.
Ok, the next step is important!  Dust flour in the center of a tea towel that you've opened and placed flat on the counter, don't skimp on flour, be generous, the dough is sticky.
Carefully place the dough on the floured tea towel and loosely fold the ends of the towel over the dough to cover it.
Let the dough rise for about one and a half hours or until it has doubled in size.  The dough should not spring back when you poke it with your finger, if it does let it rise about 15-20 minutes longer.
About a half hour before the dough is finished rising pre-heat the oven to 450F.  Place a 6 quart heavy cast iron covered dutch oven.
When the bread dough is ready, carefully remove the hot dutch oven from the oven and remove the lid.
Unfold the tea towel and quickly invert the dough into the oven, the bottom will be up, it might look like a mess, give the pot a shake to distribute the dough if necessary.
Cover the pot and bake covered for 30 minutes, uncover, continue baking for 20 minutes or until bread is a deep golden brown color, cool on a rack before slicing.  Get the French butter ready.

February 03, 2022
We're planning a trip to France 🇫🇷  this summer and of course I'm already thinking about the restaurants we will try and the meals, including apéro that we will be enjoying during our visit.  My husband and I are  going to the wedding of a dear friend in the South of France, in Antibes to be precise.  We are staying by the outdoor market which is wonderful, I visited the market a few years ago.  We will be surrounded by bakeries and cheese shops as well as assorted take away food emporiums.  Of course I had to take a small apartment in the middle of the old town which has many outdoor places to sip Rosé🍷  while nibbling on appetizers or apéro as they say in France, which sounds delightful.   I made this savory quick bread or cake inspired by Dorie Greenspan from The NY Times, so we could practice apéro -savoring small bites of thick sliced bread with glasses of crisp cold white wine- before dinner at home in Northern California before our trip this summer to the south of F
Post a Comment
Read more