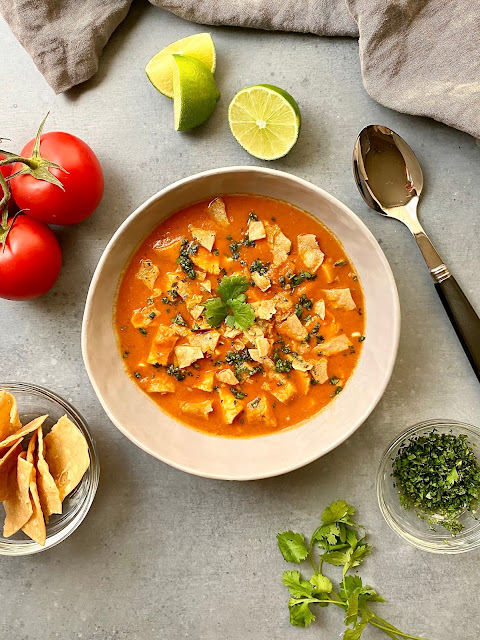 Tomato Cumin Tortilla Soup
Tomato soup I get that but why cumin?  Because while I was seasoning the soup I grabbed what I thought was oregano to add a few sprinkles but no it was whole cumin seeds, ugh 😩
So, we have a few more cumin seeds than we originally wanted.  Oh well, it is what it is.
I can't believe I'm the same age as Steve Bannon, he looks horrible and I must look great, lol 😂
Back to this soup, it's good as in tasty, easy and fast for dinner.  I crushed salty fried tortilla chips into my soup broth and then blended the entire pot, after which I added cubes of chicken, grilled corn and more salty crushed tortilla chips, also a little minced cilantro with a squirt of lime juice.  On to the recipe.
Recipe and Ingredients for Tomato Cumin Tortilla Soup
serves 4
1 pound skinless boneless chicken breasts, about 2-3
Sea salt and freshly ground black pepper
1 tablespoon olive oil
1 medium yellow onion, chopped
1 tablespoon cumin seeds, or more if desired
1 tablespoon tomato paste
1 teaspoon chipotle powder
2 garlic cloves, minced
1 small jalapeño, minced
1/2 red bell pepper, chopped
4 large tomatoes, chopped
2 teaspoon dried oregano
1 quart chicken broth
Tortilla chips, a large handful for the soup pot and additional to crumble on top of the soup
Grilled corn kernels, cut from 2 corns
1/4 cup fresh cilantro, minced to sprinkle on top of soup
2 fresh limes
Season the chicken with salt and pepper.
Heat the oil in a large dutch oven over medium high heat.
Brown the chicken on both sides, set aside.
Add the onions to the pan, cook and stir for about 5-7 minutes, until translucent.
Stir in the cumin seeds, tomato paste mixed with the chipotle powder and the garlic, cook, stirring until spices are fragrant, a minute or so.  Stir in the peppers, tomatoes, oregano and chicken broth, bring to a simmer.
Add the chicken back to the soup pot, cover and continue to simmer until chicken is 165F.
Remove chicken to cutting board and let cool.
Crush the tortilla chips and add to the soup pot.
Simmer the soup for about 15-20 minutes, add juice from one lime, season with salt and pepper.
Remove soup from the heat and blend the soup with a stick blender until smooth.
Cut the chicken into bite size cubes, put back in the pot.
Stir in the corn kernels.
Serve soup in shallow bowls with additional crushed tortilla chips, cilantro and lime wedges.

July 31, 2021
further explorations into the zen of making potato salad  I never know where my love of mustard and dill will take me but playing together in a potato salad is a nice selection on the road of top ten hits headed to mealtime.  It's summertime and that's a time for potato salads and homemade pickles but showing up together in a salad -now we are talking about good stuff.  Dijon mustard and fresh dill in a creamy tartar sauce combined with warm lemony virgin olive oil coated  red potatoes cut with the likes of fragrant pickle brine, lemon juice and apple cider vinegar -waking up all those acidic taste zones.  I'm happy with my potato salad concoction and will serve it with just about anything we grill these days, like tonight's butcher made chicken and beef kabobs- yes bring on a bowl of potato salad straight from the fridge-all the work is done ahead in the morning while the house is still cool.  I may have to slice up a cold watermelon, throw together a grilled corn ar
Post a Comment
Read more