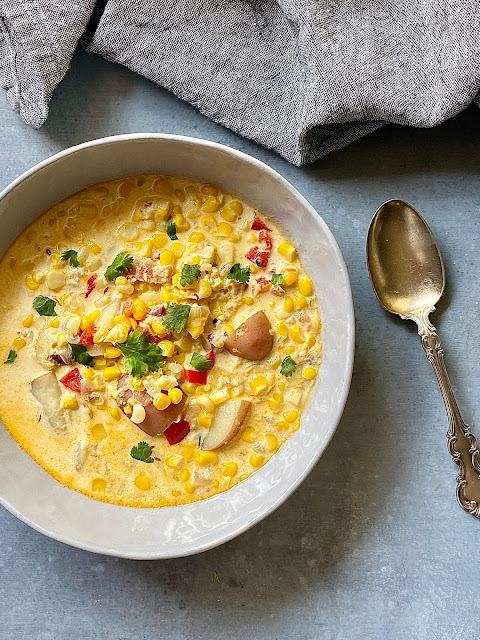 I love to make comfort food, like soup or chowder and one of my all time favorites is a corn 🌽  chowder made at the height of the  fresh sweet corn season, nothing like it.  I always add bacon 🥓 , onions 🧅 , potatoes 🥔 , red bell pepper, butter  🧈 and cream to my corn chowder but this time I added a spoonful of chipotle paste for a nice spicy note with the sweet corn.  When I think of chowder it's usually about clams or seafood 🦞.  I used to make a traditional  striped bass chowder with onions, bacon, potatoes, butter and milk or cream, now that is a bowl of comfort food.  Using emojis reminds me of turning in written papers for school that had assignment requirements like two pages of lined binder paper double spaced, emojis would have been great filler back in the day.  So, what defines a chowder?  If you don't have access to seafood like clams, a chowder can be also be made with ingredients like, chicken, vegetables -like corn, pork, bacon, potatoes, broth, milk and cream.
I make a large batch of corn chowder because in addition to chowder for our dinner, sometimes I like to share.
Recipe and Ingredients for Corn Chowder with Chipotle
serves 8
8 ears of corn, husks and silk removed
4 slices of applewood smoked bacon, stacked and sliced in 1/4" strips
1 large yellow onion, chopped
1 tablespoon unsalted butter
2 teaspoons chipotle paste
2 teaspoons cumin seeds
2 garlic cloves, minced
2 tablespoons flour
4 cups chicken broth
1 cup whole milk
10 "2 bite" red bliss potatoes, each cut into 4 pieces
1/2 red bell pepper, chopped
2 bay leaves
1 cup heavy cream
Sea salt and freshly ground black pepper, to taste
1-2 tablespoons torn cilantro leaves
Cut the kernels off the corn 🌽  into a large bowl, reserve the cobs.
In another bowl grate the corn cobs to remove all the pulp, set aside.
Heat a large dutch oven to a medium high heat and add the bacon, cook the bacon 🥓 for 5-7 minutes or until the bacon fat is rendered.
Remove the bacon from the pan with a slotted spoon and drain on paper towels, pour the bacon fat out of the pan, reserving a slick of bacon fat in the pan.
Stir in the butter and onions, cook stirring until onions are translucent.
Stir in the chipotle paste, cumin seeds and garlic, stir and cook until fragrant, about 1 minute.
Stir in flour, cook and stir for 1-2 minutes.
Gradually whisk in the broth.
Stir in the milk, potatoes, red bell pepper, bay leaves, grated corn pulp and the bacon, bring to a boil, immediately reduce the heat and simmer until the potatoes are tender, about 10 minutes.
Stir in the heavy cream and the corn kernels, simmer until corn kernels are tender, about 5 minutes.
Turn off the heat and remove the bay leaves, season with sea salt and freshly ground black pepper.
Serve in bowls with cilantro sprinkled on top.