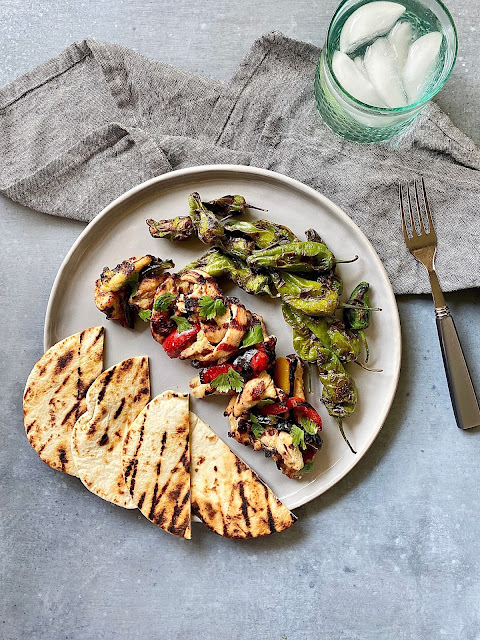 Chicken Fajitas with Padrón Peppers
Sadly, I used the last of the Padrón peppers from Luis and they were still near perfect like the day I brought them home.  Luis gave me so many Padrón peppers in a large zipped plastic bag, I thought we would never run out 😔
I love to cook but like everyone else I love a shortcut for dinner so lately my butcher has been offering ready to grill chicken fajitas and they are so easy to prepare on the grill with a few of the smaller street tacos.  We like the flour tortillas so that's what I used.  I served the fajitas with the Padrón peppers, they were good by themselves or inside the tortilla with the chicken.  I'm including a chicken fajitas recipe made from scratch just in case your butcher is not selling quick and easy chicken fajitas.
Recipe and Ingredients for Chicken Fajitas with Padrón Peppers
Serves 2-3
1& 1/4 lbs skinless boneless chicken breast and/or thighs, trimmed and cut in strips
1/2 red, green and yellow bell peppers, cut in strips
1/2 red onion, peeled and sliced
1 teaspoon medium chili powder
1/2 teaspoon garlic powder
1/2 teaspoon ground cumin
1/2 teaspoon dried oregano
1/2-1 teaspoon sea salt
1/2 teaspoon freshly ground black pepper
2 cups Padrón peppers
Package flour street tacos
cilantro, a few leaves torn for sprinkling
Mix the chicken in a bowl with the peppers, onions and seasonings.
Place the chicken mixture in the fridge for at least 4 hours or overnight.
Heat the grill to a medium high heat and grill the chicken fajita mixture until they have nice dark grill marks on each side, the peppers will grill along side the chicken, turn with tongs over the hot grill.  I used a grill pan for the Padrón peppers, grill and stir until browned and soft looking, sprinkle with salt before serving.
Grill the street tacos until they have grill marks on both sides, set aside.
Serve the chicken fajitas hot sprinkled with cilantro leaves with the Padrón peppers and the street tacos.