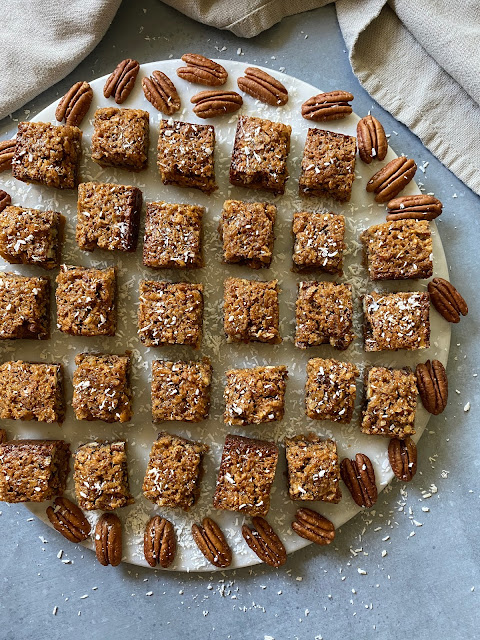 This bar cookie recipe starts with a layer of shortbread made with butter, brown sugar and flour, I like that, we're off to a great start. The next layer, equally good, starts with brown sugar that is whipped up with toasted pecans, shredded coconut, vanilla, eggs, and a small amount of flour. All good but I think my bars are kind of fall-ish for the fourth of July weekend. I admit that the easy version of pecan pie aspect of this bar cookie recipe attracted me, along with the total lack of interest in something like a flag cake made with blueberries, strawberries and whipped cream, not that I would turn something like that down. But, don't worry, I have a traditional fourth of July watermelon in the fridge for later this weekend. Fall will be here before you know it and now you have a great coconut pecan pie bar cookie recipe to bake and share with your social bubble.
Ingredients for Coconut Pecan Pie Bar Cookies
for the shortbread
1 stick unsalted butter, soft and cut into pieces
1/2 cup brown sugar
1 cup all purpose flour
for the top layer
2 eggs
1 cup brown sugar
1/2 cup unsweetened shredded dried coconut
2 tablespoons all purpose flour
1 teaspoon vanilla extract
1 cup toasted pecans, chopped
1/2 teaspoon sea salt
Preheat the oven to 375F
Butter a 8" square baking pan
Make the shortbread layer in a stand mixer, cream the butter with the brown sugar and stir in the flour until just combined.  Press into prepared pan.
Bake for 20 minutes, until light brown.
Prepare the top layer in a medium bowl, beat the eggs and the sugar together.  Add the coconut, flour, vanilla, pecans and salt, stir until combined.
Spread the topping over the shortbread layer and bake for 20 minutes, until browned and puffy.
Let cool in the pan, then turn to and cut into bars.
Store in an airtight container for the weekend, if they last that long!
Makes 36 small bars